The hazard schema stores data about the intensity and occurrence probability of physical hazard phenomena such as floods, eartquakes, wildfires or others. The specific hazard process can be defined and measured with a specific intensity unit. For example, earthquake hazard may be represented as ground shaking, liquefaction or ground displacement.

The schema specifies which type of analysis and data methodology that has generated the dataset. It supports either simulated probabilistic scenarios and empirical observations. If the dataset has been produced for a specific location, such a city, the name of the location can be included.

When the scenario modelled refers to a specific period of time, this can be specified in terms of dates, period span and reference year. For example, an observed flood event that occurred from 1.10.2009 (time start) to 3.10.2009 (time end), spanning over 3 days (time span). When precise time collocation is unknow or inapplicabile, a general reference date such as "2009" is used to identify events (time year). This is also useful to specify future scenario, e.g. time year: 2050.

When instead the hazard scenario is represented in probabilistic terms, the occurrence probability (frequency distribution) of hazard can be expressed in different ways. The most common way to communicate this is the "return period", expressed as the number of years after which a given hazard intensity could occurr again: RP 100 indicates that that event has a probability of once in 100 years. This attirbute can indicate individual layer frequency (RP100) or a range of frequencies for a collection of layers (RP10-100) The probability of occurrence is usually calculated on the basis of a reference period that provides observations: this period can be specified by start date, end date and time span. For example, an analysis of eartquake frequency based on seismic observations from 1934 (occurrence time start) to 2001 (occurrence time end), for a total count of 66 years (occurrence time span).

The hazard dataset could include one or more footprints for the same event, where each is one possible realisation (i.e. one footprint could represent minimum, another footprint the average and another one the maximum). The event uncertainty can be represented explicitly, through the inclusion of multiple footprints per event.

Below is the list of all hazards and related process types:

Schema attributes for flood hazard map related to occurrence probability of a river flood event with a return period of once in 100 years over Kabul, Afghanistan. The hydrological data used for modelling the intensity of floods is derived from observations over the period 1958-2001 (44 years). The hazard intensity is measured as water depth, in meters. These information cover all mandatory fields, and few optional fields.

Schema attributes for earthquake hazard map related to occurrence probability of an event with return period of once in 1000 years over Afghanistan. The seismic data catalogue behind the calculation of occurrence probability start from year 800, covering a period of 1200 years. The hazard intensity is measured as Peak Ground Acceleration, expressed in (g). 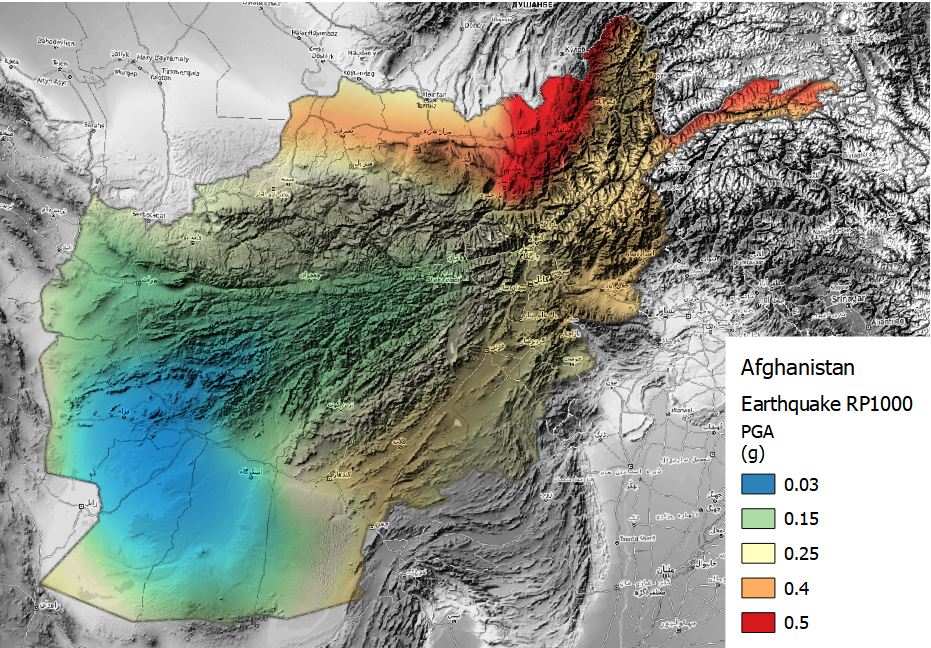